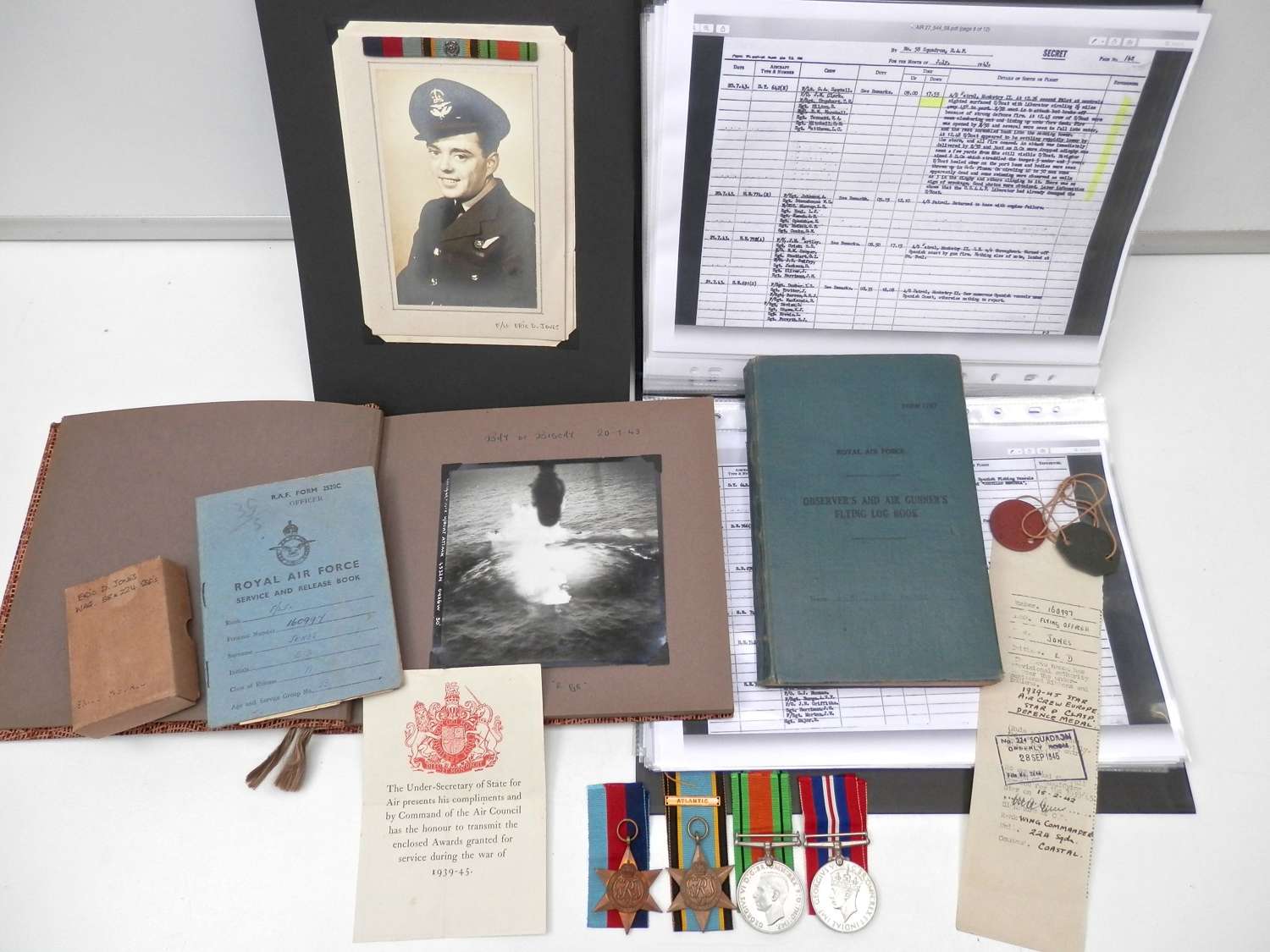 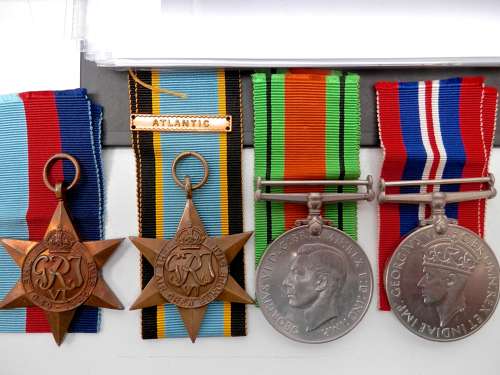 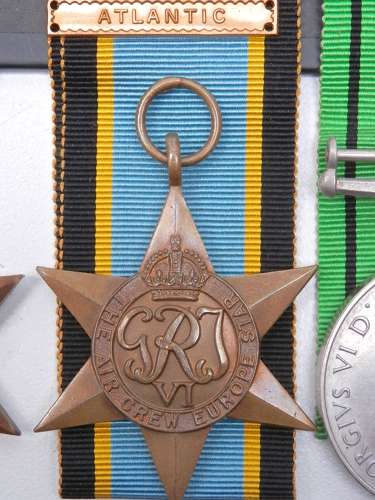 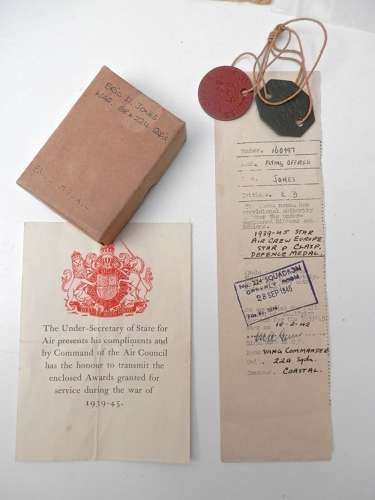 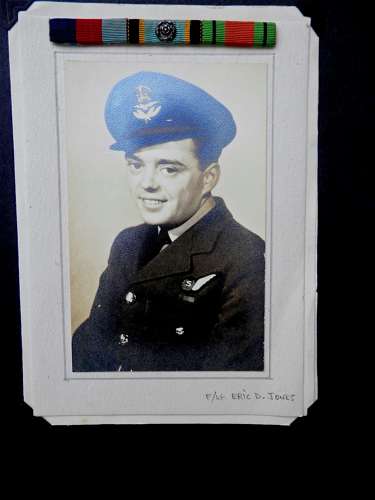 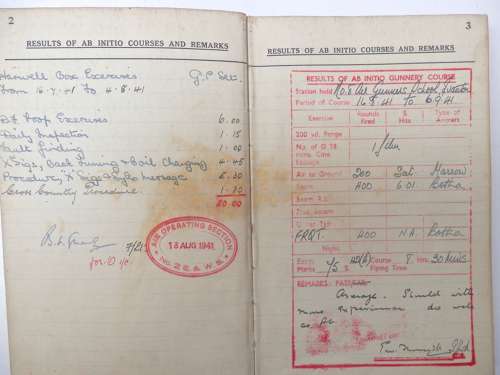 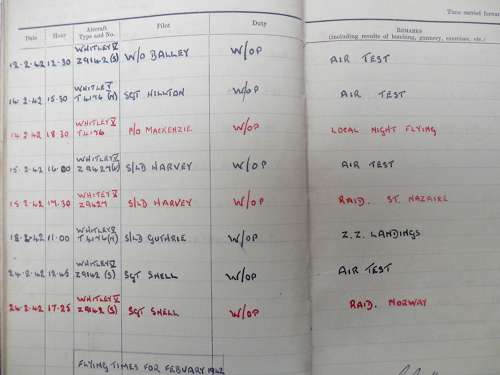 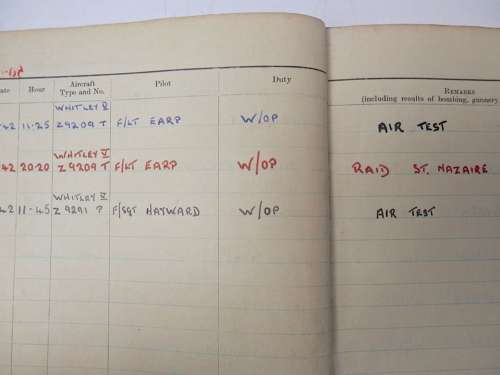 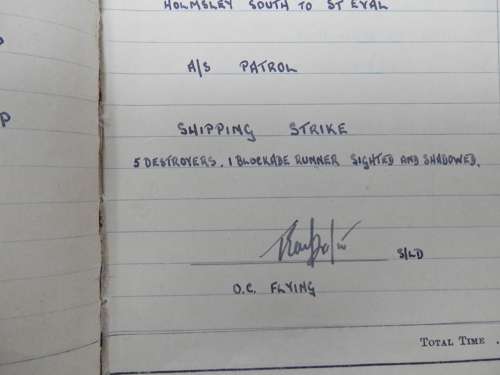 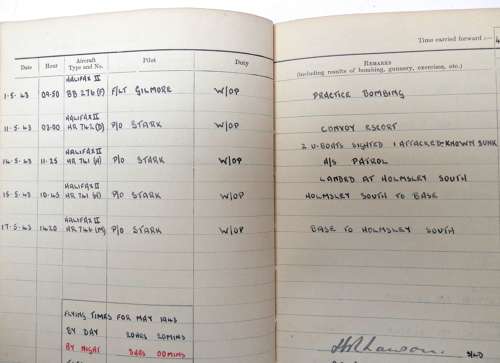 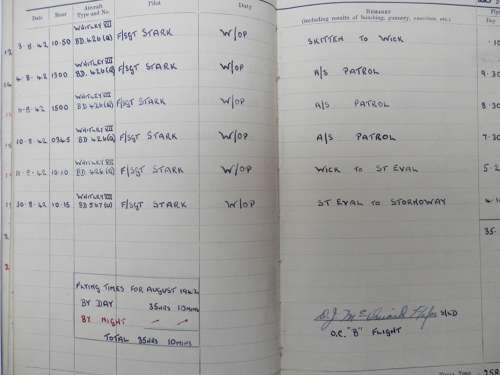 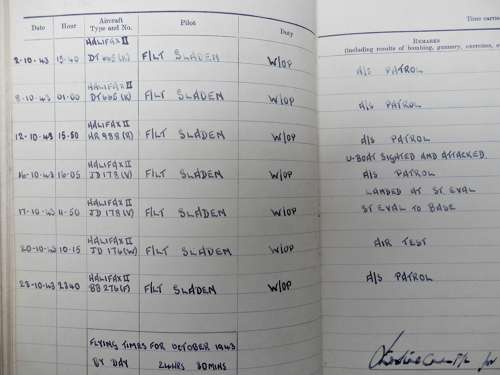 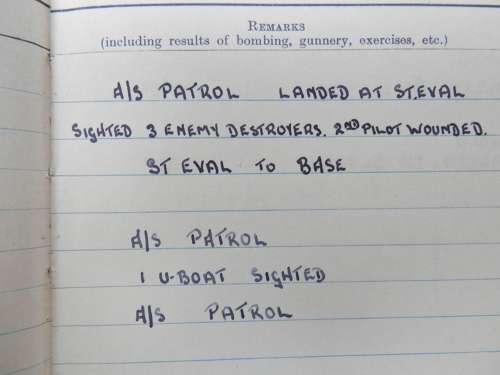 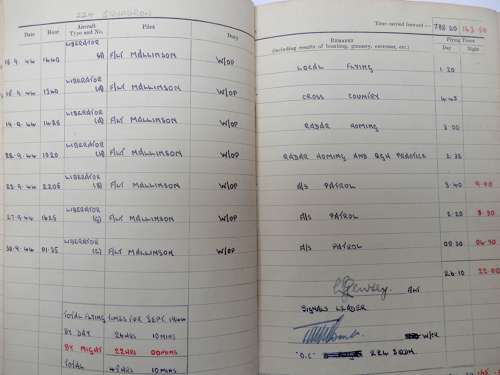 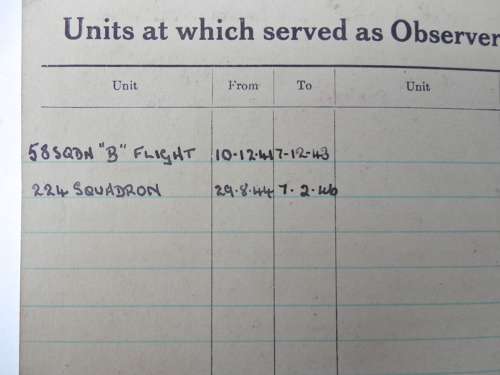 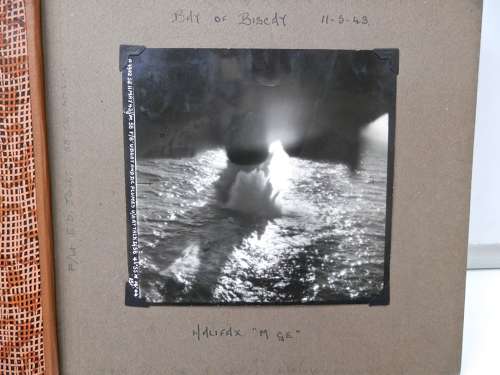 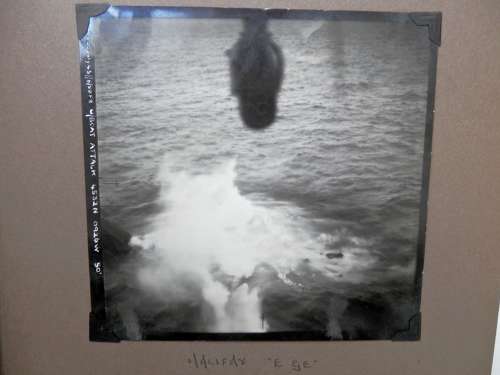 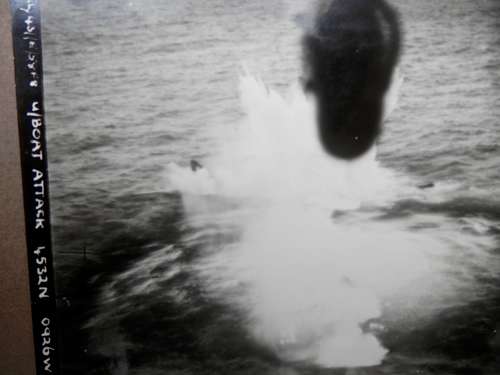 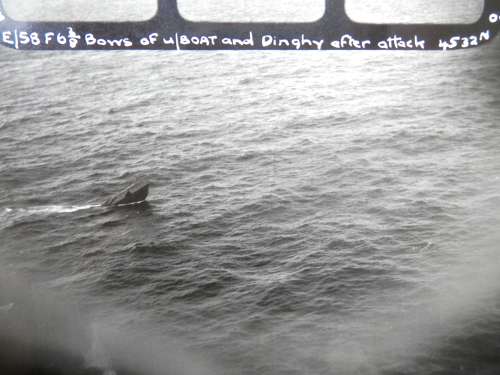 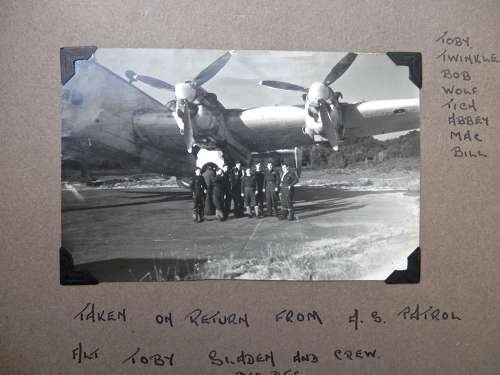 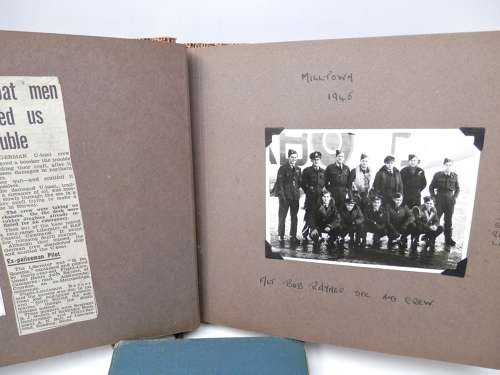 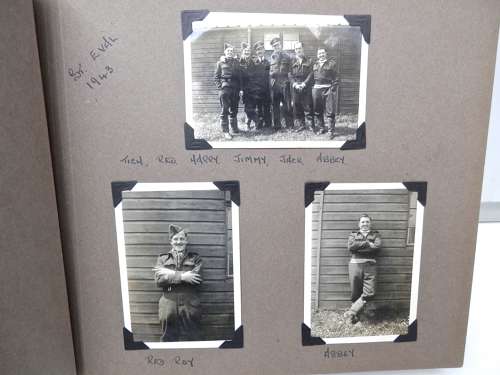 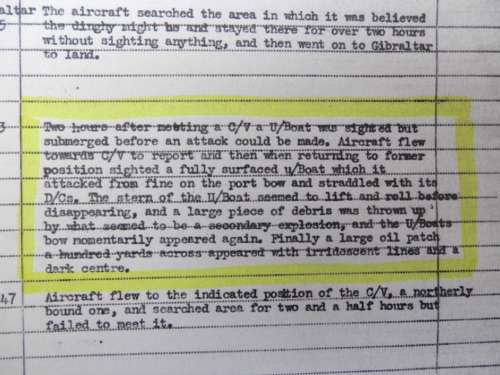 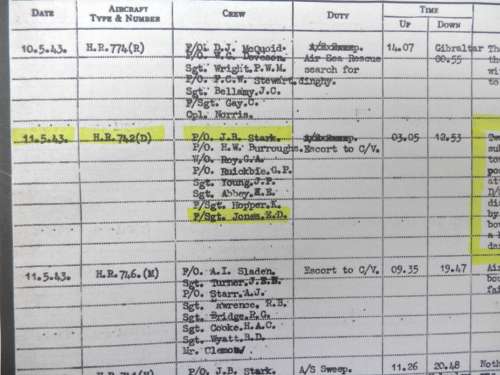 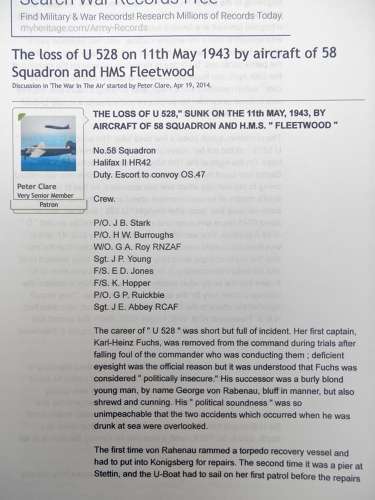 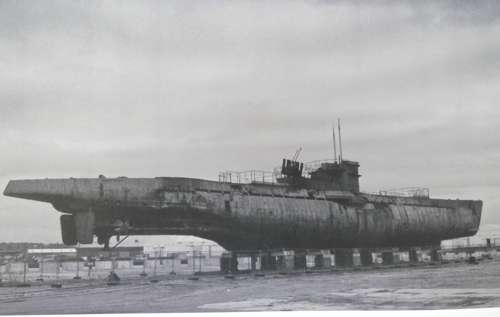 Sergeant Jones was posted to RAF bomber command, 58 squadron, Linton-on-Ouse, in December 1941. Here he was flying in the cumbersome twin engined Whitley bombers, as a wireless operator / air gunner. His first operational flight was on the 15th February 1942, to St. Nazaire, flying with squadron leader Harvey as his Wop. Further operations then followed to Norway, and to St. Nazaire. In April 1942 the squadron was transferred to coastal command. Now based at RAF St. Eval the squadron flew anti-submarine patrols over the western approaches as part of number 19 RAF group. Sgt. Jones was now flying as a regular crew member with flight sergeant Stark's crew. Further anti-submarine patrols and ship escorts were completed, then on 2nd May 1942 they sighted and attacked a German U-Boat, the results of the attack are unclear, so research is needed here. Many more patrols are listed in Jones log book, with some lasting for over 9 hours. This must have been near the maximum endurance for the old Whitley bomber. Then, at the start of 1943 the squadron are re-equipped with the 4 engine Halifax bomber. After the conversion course was complete, in March, the squadron re-commence u-boat patrols. On 11th May 1943, (now) pilot officer Stark with sgt Jones (nick-named titch) as wireless operator, the crew of the Halifax HR 742 (D) were ordered to escort a naval convoy in the bay of biscay. After meeting up with the convoy the Halifax crew located 2 submarines, and proceeded to attack the nearest 'shadowing' U-Boat with depth charges. Once hit, the stern of the sub seemed to lift and roll before disappearing, and a large piece of debris was thrown up by what seemed to be a secondary explosion, this lifted the bow from the sea only to sink again. Afterwards a large oil slick could be observed where the U-Boat had been. Stark and his crew were later confirmed as U-Boat 'killers', one of only a small number of RAF crew during the war. Beginning of August 1943 saw them on another u-boat (a/s) patrol when they sighted 3 enemy destroyers. Closing in, but still at a distance of 3 miles, the Halifax came under fire from the enemy destroyers and was hit by an explosive shell which damaged the cockpit area. The result was the wounding of the second pilot. They immediately returned safely back to base at St Eval. On 12th October 1943, on a/s patrol they again sighted a U-Boat on the surface some 2 miles in the distance. Attacking at once they dropped six 250lb torpex depth charges from a height of only 100 feet. Black coloured depth charge explosion plumes were observed on either side of the submarine which submerged almost at once. Only a possible 'kill' this time ! After another a/s patrol Sgt. Jones tour of operations with the squadron came to an end and he was posted on leave.

After leave he crewed up with a new pilot F/Lt Mallinson, and Jones found himself serving a second tour with RAF 224 squadron this time flying in Liberator's. Eric Jones flew on many more patrols with his new crew, of which brought him promotion to officer status. Staying with 224 squadron until his last flight on 28th January 1946, then being de mobbed with the rank of Flight Lieutenant. Eric Jones wartime RAF service saw him flying on two operational tours with bomber command and costal command. Commencing in the out dated Whitley bomber, then flying Halifax and finally Liberators. He took part in at least 80 anti-submarine operations plus another 11 ship escorts and sweeps.

His log book is well written, being over half full with entries. His boxed medals are included which are the 1939-45, Air Crew Europe stars with Atlantic bar, Defence & War medals all with silk ribbons, wax packets, in a very fine condition. His medal slip and medal entitlement slip, his 'dog tags', service & release book, a portrait photo with his original tunic medal ribbon bar on the top, his 'superb' photo album, a ring binder with copies of his operations taken from the squadron ORB, information on the sinking of U-Boat U528. His photo album has 22 'original' wartime photos of his RAF service. These include photos of U-Boats under attack by them, and U-Boat U528 under attack and sinking, crew photos, photo's with their aircraft, crew signatures (on the backs of photos) newspaper clippings, individual crew member photos, aircraft postcards etc.....

A superb and important grouping, with Bomber Command and Coastal Command interest, and one of only a handful that have a confirmed U-Boat 'kill' status.