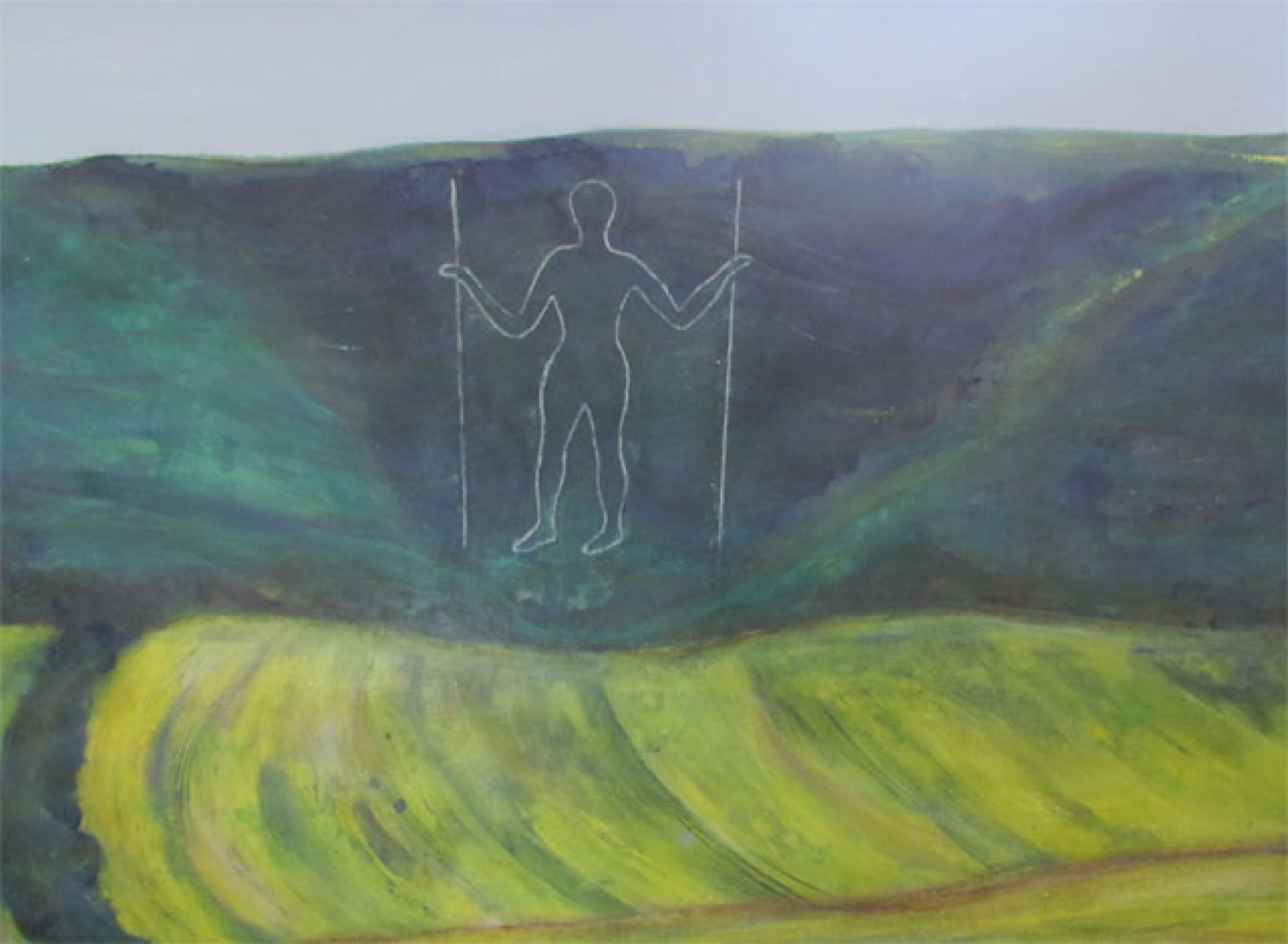 'Lady of the Downs'.

Mixed media (acrylics, inks and pastels) on board.

The Long Man of Wilmington is an unmissable part of the Sussex landscape.  It’s set in a sort of natural bowl whose contours and striations contrast with the stark clean lines of the ‘drawing’. I’ve doodled and sketched this many times.  Suddenly I realised that what I was drawing was an elegant feminine figure, with a pronounced waist and hips.  It seems I’m not the first to have thought this.  I like the thought of a  benign feminine presence on the Downs and have set her in a landscape with soft colours and flowing lines.

I spent much of my early childhood in Germany and Africa – where I read every book on my parents’ shelves, became fascinated by the patterns on everyday objects, and learned to make lino-cuts. We returned to a dark rainy London when I was in my teens. I detested school but was rescued by an inspirational art teacher, Meriel Cardew (wife of the potter Michael), a vivid, kindly figure. Highlights included visits from Michael and from the Nigerian potter Ladi Kwali. At this point I wanted to be a singer, a writer and an artist! I was firmly steered away from these delights into an academic path by school and parents. Somehow I found myself a university lecturer on medieval French literature.

I continued to paint and pot and draw. I finally turned to more or less full-time art in the mid-90s and followed courses in Art and Design, Textiles and Ceramics. I won a prize, actually a commission to create a mural 6’x24’ for a local firm, and my design work for City and Guilds was shortlisted for a medal. My first solo show soon followed and I have been exhibiting and selling work ever since.

Colour is, literally, vital to me. I use paints, inks, dyes and pure pigments to build up intense and glowing but (I hope) subtle colours. Many of my pieces are made on my own hand-cast cotton paper which offers a seductive texture to work on and can be moulded and manipulated. I constantly experiment with materials and techniques. I juxtapose throwaway or reclaimed materials with costly ones such as pure pigments and gold and silver leaf. I often make art out of, or about, things people throw away – the detritus of life. So long as it doesn’t rot, fade or rub off I’ll consider it.

I’ve shown work all over the UK and have had numerous solo exhibitions in private and public galleries, especially in the North and Midlands where I lived until recently. I’ve done commissions, workshops and projects and given talks. I’ve also helped to run Open Studio schemes and now take part in the Brighton Festival and Brighton Science Festival. My work is in private and public collections in the UK, France, Germany, US and Tasmania.